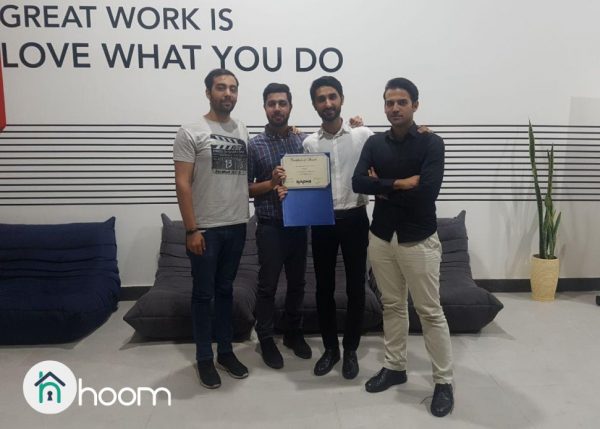 Hoom is a startup that is active in the Internet of Things. The product of this startup is a smart door opener that allows you to open the garage door through the mobile and provide access to this platform. This startup, which has succeeded in attracting capital from home appliances, has followed its growth along with the hard-tech accelerator. To get familiar with this startup and to be aware of the success story of the Hoom, we will accompany “Farid Lotfi”, CEO and co-founder of this startup, who has received his Master's Degree in Electrical Engineering at Amir Kabir University.

Why did you decide to start your own business?

My other co-founders and I have been friends for years, but we had not made a decision to create a new business. We went to the library to study the topics of the MSc exam. Studying was not attractive any more, and we decided to start something that would have a positive effect. We knew that studying was not the only way to achieve such a work.

What did you start with?

The initial idea was about intelligence. It was fascinating for us to be able to connect various devices to the Internet and make access to control it. At that time, I still did not know that this issue was being discussed in the world and it was known as the Internet of Things. At that time, the Internet of Things was a new issue, at least in Iran, not so much known. Since 1395, we have statrted the research and we had a series of conferences. During this time, we were studying resources on the web, being acquainted with the products that were available on the market, and sharing this knowledge together. Since the summer of the same year, we started working on the concept of smart doors. We wanted to design a smart door having features like opening by a mobile phone and an RFID card, having a camera instead of a peephole, allowing you to change or personalize the ringtones, and lots of other functionality.

Did this idea came to the product too?

Yes, we bought a door for real, and in the workshop we added all the features we designed for the smart door. The goal was to negotiate after creating a sample with companies to produce it. After making the door, we participated in a number of international exhibitions and welcomed by the manufacturers. Despite being well versed, the product was not scalable due to the type of design and the costs it created. At the end of summer, we attended an event organized by the iotic around the Internet of Things. We did not think that we would be elected but after the match, they called us and said that we had a seat. At the same time, the Ninic team had participated in the event and we were acquainted with them. Awards were given to us by a large cardboard check. How to cash this check was the issue that made a fateful conversation. The conversation we had with the members of the Ninic team led us to get acquainted with the newly-developed hard-tech accelerator. At the same time, we had proposes from iotic and two other accelerators, but despite the fact that the hard-tech was newly established, we decided to start the cooperation with it. The reason for this decision was the members of Hard-tech. We felt close to them because they themselves had the experience of setting up startups and entrepreneurship, and came from the very space we were experiencing.

What happened at hard-tech?

He was the first team to join the accelerator outside of the original hard-tech core. We settled in their office located at Vozara street. We took the same door built to the accelerator to work on, but during the meetings with the CEO of Hard-tech, Amir Shokhohinia, we came to the conclusion that pursuing it as a startup task was not possible. During these meetings, we became acquainted with the startup concepts and decided to follow the study path for further information. Those meetings and these studies led to the decision to change the product to achieve a scalable model. At hard-tech, the culture of the struggle was dominant, and for the teams to succeed, support was beyond the reach of the agreements, as Hoom team also enjoyed much of their support for the agreement.

What kind of product did you considered after the smart door?

In our interviews with other people, we realized that security was the most important feature of the door, so we decided to work on sensors that detected the opening and closing of doors and windows. We designed our product and produced 50 pieces as prototype. We put the product to the market and did not get positive feedback. The higher end price than the rivals and the relative low quality of the original product that we were offering was the second failure. However, there are still people who use the same product and even call us for services. It took about 5 months to start work on this idea until its failure. We tried to use lean concepts and, thankfully, we succeeded in its implementation. We communicated with concepts such as market feedback and failure and so, once a product from the market did not receive positive feedback, we accepted the failure and decided to rotate.

What was the result of this rotation?

In the smart door we had produced earlier, we also had the idea of opening the door using the mobile. We tried to develop the same idea that ultimately led us to the current product, the smart parking door opener. The easy installation and use made the new product welcomed. This product will allow users to create new access to mobile phones without having to pay for buying new remotes. The ease of launching the product with the help of a mobile app is also another attraction of this product.

What feedback did you get from this product?

While we produced 100 products and sold them receiving positive feedback from the market, we also participated in the DMOND IOT Pitches event, which made us feel that we are on track to make the right move. DMOND event was the starting point for our relationship with investors, after which several investors contacted us. Finally, we chose CAN home appliances as investors as one of the suggestions.

What distinguished "CAN" home appliances?

To attract the investor, we needed to get the product introduced in the market first, and when it happened, we looked for the investor. CAN was the first investor we entered into serious negotiations with. The 30-year experience in manufacturing, having electronic factories and mold production, as well as access to the supply chain, were features that made CAN an attractive option. Along with these facilities, we have seen the spirit of the struggle for a new job in this investor as they think of success more than their financial profits. This spirit helps us to correct our paths if we find a problem somewhere and move with a strong will to succeed.

Now that you have succeeded in attracting funds, what are your plans?

After receiving fund from CAN, we are producing the first 500 batches of our product, which, thankfully, has already been sold out. In the next step, we plan to produce a 1000-batch for Ordibehesht. We are located at the office provided by CAN and have plans to expand the market. We have representatives in five cities of Iran and we are looking to increase this number so that we can represent the whole of Iran. Given the rapid growth we are experiencing, it is anticipated that this overall coverage will be created in the first six months of the year 1398.

Do you have product or other products in your plan?

We are now able to open the parking garage with the use of mobile phones, and in the next step, we plan to do the same by producing two other products for the courtyards and the entrance door of the apartment. The product we look for in the yard will have a similar function to the current product, but for the entrance doors of the apartment, we need to design an intelligent lock that transforms it into a product with special technology. We were able to create the technical infrastructure of this intelligent lock with the help of the technical team, and we will launch it to the market in the year 1398.

What will be the long-term change or the positive effect that Hoom makes?

Current keys require carrying. In addition, if the key is at the discretion of the individual, it is not recognizable when the key is used or whether another version of that has been made. Making other keys to creating new accesses is another problem. Due to these problems, we are looking to change the key concept by designing and developing digital keys that can be used by mobile phones.

What was the most important factor that made Hoom’s success?

The day we started, we did not even know what the startup was, and the only thing we had was the will. I think anyone who has the patience, will of course, and be an entrepreneur can be successful. Naturally, not anyone whose personality does not meet entrepreneurship and many are not willing to risk, or accepting entrepreneurial pressures is inappropriate to them, and it is not necessary for them to be entrepreneurs in a society. If anyone wants to enter this area, we will know that we started one day without knowing it and got here. Of course, we are still at the beginning, but so far, we have come to the right place. Others can if just keep going and not get tired, wait, and help each other. There is no doubt that no matter how dark it is, the light will finally rise.